The Amazon molly (Poecilia formosa) is an all-female livebearing fish. Although inheritance in this species is strictly clonal, females require sperm, which they obtain from matings with heterospecific males, to trigger embryogenesis. Hence, asexual females (Amazon mollies) always coexist with closely related sexual females (either Atlantic mollies, P. mexicana, or Sailfin mollies, P. latipinna) in the same habitats. This allows for a direct comparison of advantages and disadvantages between the two reproductive strategies. Such comparisons not only provide insights to the mechanisms mediating the stable coexistence of asexual and sexual reproductive forms, but generally on the factors selection for sex and recombination. 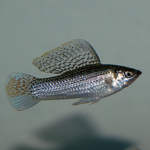 Throughout its range, the Amazon molly is exposed to a wide variety of environmental conditions ranging from coastal habitats to mountain creeks, coexisting with different species of sperm donors. I compare different populations of  asexuals to examine whether they are locally adapted to different sperm donors. Furthermore, I compare eco-morphological variation within asexuals to variation within sexual species to quantify differences in phenotypic plasticity and evolvability among reproductive forms.

The Red Queen, parasites, and MHC

In collaboration with Ingo Schlupp (University of Oklahoma) and Dustin Penn (Konrad Lorenz Institute for Ethology, Vienna), I am using the Amazon molly system to test the Red Queen hypothesis, i.e., the idea that asexual organisms are more susceptible to rapidly co-evolving parasites and diseases. We are using parasite assays in combination with immunogenetic (MHC I and MHC IIB) and population genetic (microsatellites) analyses to test this hypothesis in natural populations.